There is a flavor of hyperboloidal compactification commonly used in perturbation theory that goes under the name “minimal gauge.” The associated time slices extend smoothly between the event horizon and null infinity. Minimal gauge was first proposed by Schinkel, Ansorg, and Macedo in 2013 and further formalised in the context of Schwarzschild, Reisnner-Nordstrom and Kerr spacetimes. The main advantage of minimal gauge over other smooth hyperboloidal foliations of the exterior Schwarzschild domain is its algebraic simplicity. The purpose of the post is to provide a derivation of minimal gauge that emphasizes this simplicity.

To bring things in context, we’ll start with regular coordinates across black-hole horizons, which are called horizon-penetrating.

A common feature in both constructions is the logarithmic singularity of the height functions \eqref{PG} and \eqref{EF} near the horizon. This behavior is reasonable. Schwarzschild coordinates are singular at the bifurcation sphere, so it takes another singularity to fix it. The leading order behavior of both height functions near the horizon is $$ h_{\textrm{horizon}}(r) \sim \ln(r-1). \tag{horizon} \label{horizon}$$ But why this particular logarithmic singularity?

To understand where this comes from, we need to follow the light. The null surfaces in Schwarzschild coordinates are given by $$ h_{\textrm{null}}(r) = \pm \int \frac{dr}{f(r)} = \pm (r + \ln |r-1|). \tag{null} \label{null} $$ The null rays are ingoing (regular at future horizon) for the positive sign, outgoing (regular at future null infinity) for the negative sign. The leading order behavior of ingoing null rays near the horizon is $\sim\ln(r-1)$, as it appears in both Gullstrand-Painlevé and Eddington-Finkelstein coordinates, which explains why regular coordinates across the black-hole horizon in Schwarzschild spacetime must have this singularity structure in the height function.

Above are the Penrose diagrams depicting the time slices for Gullstrand-Painlevé and Eddington-Finkelstein coordinates.

Inspecting these Penrose diagrams indicates that there is another intersection of time slices similar to the one we have just resolved near the bifurcation sphere. This time, the intersection is near spatial infinity. In fact, the height function for \ref{null} rays blows up at infinity!

The standard response to this observation is to ignore it because it happens at infinity. But there is a problem here with respect to the null structure. If you want a regular description of the energy propagation along both in- and outgoing null rays, you should use regular coordinates at both the horizon and infinity. The Penrose diagrams above clearly demonstrate that the time slices intersect at infinity. Not good!

So let’s pick a time coordinate that takes care of the singularity at infinity as well. The behavior we want near infinity is one of an outgoing null ray, i.e., the minus sign in \eqref{null} with the leading order terms $$ h_{\textrm{infinity}}\sim - r - \ln r. \tag{infinity} \label{infinity}$$ To construct our desired time coordinate, we need to combine the two desired behaviors near the \ref{horizon} and \ref{infinity}. But we must be careful that the horizon height function doesn’t mess up the infinity behavior, so we’ll take off its leading large $r$ term, like this $$ h_{\textrm{horizon}}(r) \sim \ln|r-1| - \textcolor{green}{\ln r}. $$ The green term cancels the $r\to \infty$ behavior of the horizon height function.

We’re finally ready to construct the gauge that connects the horizon and null infinity smoothly. We simply combine these two behaviors and get the minimal gauge: $$ h_{\textrm{MG}}(r) = \ln|r-1| - 2 \ln r - r. \tag{MG} \label{MG}$$ In a sense, this is the simplest, or minimal, choice you can make respecting the leading order behaviors of the horizon and infinity height functions with respect to ingoing and outgoing null rays.

Connection to the Music of Black-Holes

The minimal gauge is a relatively new set of coordinates, having appeared only in 2013. Remarkably, there is a connection between the minimal gauge and a widely known method to calculate ringing frequencies of black holes.

When a black hole is perturbed, it rings with a characteristic frequency spectrum while emitting away the energy of the perturbation in a ringdown, just like a musical instrument, or a glass that has been tapped with a knife. Such decaying oscillatory perturbations are called quasi-normal modes. The details of the ringdown, such as the frequency of oscillations and the rate of decay, depend on the physical parameters of the black hole. There is a vibrant research direction called black-hole spectroscopy that studies such black-hole quasi-normal modes.

The most prevalent method to compute black-hole ringdown frequencies was presented in a 1985 paper by Leaver. The first step in Leaver’s method is to write the perturbations in frequency domain via a Fourier transformation. For simplicity, we assume a scalar perturbation causing a harmonic oscillation with a single frequency $\omega$. We can then separate the space and time dependence of the perturbative field, $\phi(t,r)$, as $$\phi(t,r) = e^{i\omega t}\psi(r).$$ It turns out that the frequency-domain perturbation blows up both near the horizon and near infinity. This perturbation blow-up is a consequence of the equations that the black-hole perturbations satisfy when they are written in Schwarzschild coordinates. You will immediately recognize the issue from our previous discussion. The perturbation blows up simply because the Schwarzschild time slices intersect both near the horizon and near infinity.

The pathology of Schwarzschild time slices and its relationship to the pathologies of black-hole perturbations were not recognized during Leaver’s time. Instead, Leaver used traditional tools from the theory of ordinary differential equations and suggested a rescaling to pick up the perturbative field’s pathological behavior $$ \psi(r) = r^{2i\omega} \left(r - 1\right)^{-i\omega} e^{i\omega r} \overline \psi_{\rm L}(r). \tag{L}\label{L} $$ He then performed a Taylor expansion around the horizon for the regularized perturbation $$ \overline \psi_{\rm L}(r) = \sum_{k=0}^{\infty} a_k \left( 1-\frac{1}{r} \right)^k. $$ The coefficients of the expansion, $a_k$, satisfy a $3$-term recurence relation which we can now iteratively solve for. This method is the most common method to compute black-hole frequencies to this day. 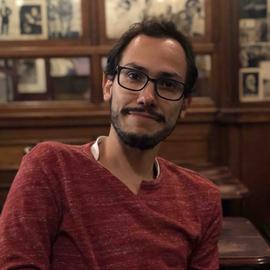 I work in the interesction between mathematical relativity, numerical relativity and astrophysics. In the good days, I provide a link between the three fields. In the bad days, I don’t belong anywhere. 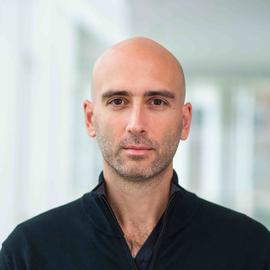